Taken to the Soil
Falling, failing like that
Westering
Beside my self with
Pacific Grove, California
Correcting for Death
Dirty Work

Taken To The Soil

In late September, the ground he picked out
warm yet, the boy lay down. His human days,
over, he had taken, quite devoutly,

to the soil. Fall was heavy, drifts of rust
ballast for the voyage. He felt the knot
in his stomach un-sprool, become tap

root, his spine dowse for loam. He let
his lungs fill with spores, dust, the cast-off wings
of insects. He matched his breath to the suck

of the wind as glint ebbed to thrum, then hush,
he let the earth hear him out.
Each day,

before school, his sister fills a bottle
from the tap, carries it to him by the neck.
Evenings, she scatters coffee grounds

flecked with gleaming eggshells, and quietly,
she stretches out next to him, their faces
close as crossing lights. 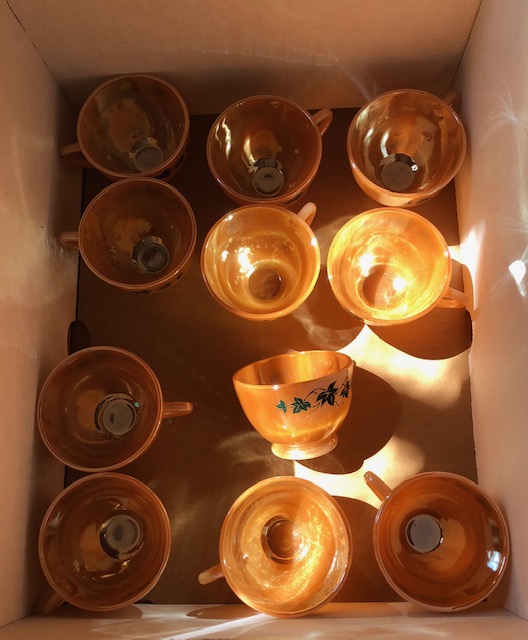 from Tulane Review and Speaking Parts

Beside my self with

I’d killed off two, maybe three of my selves
stuffed them in the broom closet
why not the crawl space I wonder. Closets are the first places they look.
What it felt like to kill I don’t remember except
in the bathroom with the cracked skylight
the roaches when I turned on the lamp to pee, the ants on the one cup
I didn’t rinse before bed.

On the lam, I’m invisible in mirrored Ray-Bans

when the noir version
where even the camera wields a scalpel
framed for something you didn’t do
lights up my smart phone like a conscience, see?

Run into the actress playing me. Try to avoid her.
End up complimenting extravagantly.
She’s so self-possessed. Knows about murders.
Her unruffled hippie chic, and underneath the floaty ruse—harsh as shit kicker boots.
Much better at this scene. More than one of me thinks,Honey, you can have the part.

Hole up in Manhattan. Try to blend in. Which who lives in this cold water flat?
Up a steep and very narrow staircase. Interior decorated in paisley squalor.
Didn’t Didi turn me on to this hide out?

I play shell-shocked, as happens in times like these
when words don’t—spit it out . . . work.
Plus I’ve never been good with faces.

When I was who, what did I didn’t do?
I must
belong here, don’t I
keep coming back—I do. I do. Fuck. I do.
Eventually one feels assaulted by disguise.

from Cultural Weekly and Speaking Parts

Ladies Sketch Club on the Beach, 1890

and boss around the day
is not considered women’s work

the dried colors     caked
under my fingernails
all the proof

only let me wait out
for the golden hour

like beach tar     whiskered blackly
in sand     and burnt umber

from Cultural Weekly and Speaking Parts

I play this character
Dead Judith on the call sheet.
With a paint gun, a makeup specialist in effects
sprays a dead person’s face
on my face.
Steady, with brushes made of a single eyelash,
hand mixed color concoctions are applied
correcting for death.
Stria, for coagulation under the skin.
The mottled freckling of an overripe peach for blood splash.
A sculpted bullet hole in my temple.
An exit wound weeping syrup out my cheek.

Grips remove the rearview mirror
from the ¾ ton pick-up where I am slaughtered.
Not for my sake,
for the camera angle.
I’m in an onion field.
Gore drips off the shattered passenger-side window.
Brains puddle on the Naugahyde seat.

Lunch isn’t for hours:
we’ll be on this shot forever.

from Dark Ink: A Poetry Anthology of Horror and Speaking Parts

A helicopter lifting the living just / out of reach
Ocean Vuong,
Night Sky With Exit Wounds

Night air whipped up by whirring blades cools us. The whole shoot, an atmospheric swamp invades this desert basin.  Thick, hot, sticky, like a dragon’s exhale.  At the location—an L.A. stand-in for the American Embassy—old French architecture, green around the faucets, black mold that won’t scrub off. We trudge through the plot, grease-painted, hair strategically oil slicked up.  Smoke Marlboros and feel the heat equalize in our lungs.  Now, the middle of the last night, we bless this loud door-less 1975-era chopper.  We can’t hear anything anymore, we’re leaving.  Scream your head off, Vietnam.  Real marines cast as marines won’t stop pumping their toy rifles, barking, EVACUATE! MOVE IT! UN-ASS this place

NOW!!   Takeoff feels like a giant standing up. The director says, You don’t even have to act.  Just let the gravity wash over you.  Below us, the pitch black’s punctured with streetlamps as we careen over the Hollywood Freeway.  Oncoming headlights, rows of white and predawn tails streak red in their brightness, receding as after a long night of tripping—trails—high, on altitude or nothing at all or after days on end of shooting the fall of Saigon. Never been in a helicopter before. On this Dramamine-free ride, we’re passing through the gates of nausea and pandemonium.   We have to be leaving but are soon tugged back by

the unchecked cargo of wannabe refugees, their arms hooked onto the landing skids causing a drag on the engine’s motor, a baffled whirring, high pitched and shrill, like the wailing cry of the useful birds of Vietnam, the cattle egrets and oxpeckers that hang out in the grassy verges of airports who do dirty work, attending to the water buffalo, grooming them, pecking out ticks, grease, snot, mucus, earwax—it’s how they’re nourished,  grazing on giants who tolerate them, violently shake them off, passively allow them back. . .

Fugitives are shrugged off with a sharp bank, unlatching them, pitching them off to the long drop into the South China Sea. All of them flailing, then soaking wet, handed towels, then on the next take, dunked again, all of them extras summarily wrapped off the set in bathrobes. Onboard, we feel the jolt of their departures like a convulsion, feel the chopper suddenly burst higher, severed from attachments, eclipsed by the score, Hendrix growling through There must be someway outta here as if he isn’t already years and years in the ground.

*
Every time you fly
look for useful birds.  Landless,
they delight the sky.